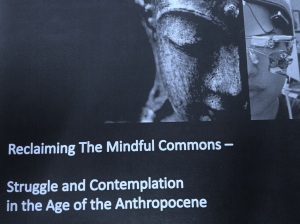 The Historical Buddha: A Living Parable for the Age of the Anthropocene

The historical figure, Siddhatta Gotama, probably lived and taught between the years 563 and 483 BCE in the foothills of the Himalayas. The iconic story of his birth into an economically and politically influential family in the village of Kapilavatthu and, at the age of 29, the tale of his subsequent renunciation of this relatively comfortable material existence in favour of the holy life of the wandering ascetic living on alms (bhikkus) has echoed down the centuries. The story has a special resonance in our own age because Siddhatta’s quest – in common with other prophetic figures that would emerge across the world during the pivotal or Axial Age (800–200 B.C.E) (Armstrong 2001) – was sparked by a restlessness and disillusion with received convention and tradition. Change was in the air.

Siddhatta’s response to his time and place – marked by considerable social disruption – was characterized by a courageous and strikingly modern response to the stark realities and fleeting nature of our lives on earth. In a discourse to the people of Kalama who had become confused by conflicting doctrines and teachings, Siddhatta advised that it is proper to doubt, to be uncertain and to refuse to act on that which has merely been repeated or presented as tradition, even if it is offered as a sacred teaching. (Batchelor 2010, 98-99)

In the course of several centuries the Axial period marked a decisive shift in collective human consciousness (of itself and of the world), with figures such as Confucius and Lao Tzu, Zoroaster, Socrates and Plato, emerging within their own distinct worldviews to launch transformations in thought and understanding. The great thinkers of the Axial period shared a sense of a world gone awry and set about interrogating inherited truths, often turning inwards to uncover beauty, order and a new horizon of meaning.

It is useful to recall that recorded history only begins around 3000 BCE. Siddhatta and the other great thinkers of the Axial period represent an important moment in the register of human consciousness itself – a formative moment when humankind began to articulate in a new way what had, up to then, been a dim memory of our long passage out of the Paleolithic era. In crossing this threshold of self-consciousness our species encountered finitude – most fundamentally, the reality of death and the passage of time. It has been suggested that it is precisely from this emergence into self-conscious knowledge and an awareness of time – both associated with our unique human predicament and a deep restlessness rooted in chronic insecurity – that we derive our myths of ‘the Fall’. Loren Eiseley puts it rather beautifully: ‘The story of Eden is a greater allegory than man has ever guessed.’ For what was lost was the blissful ignorance of the natural animal that walks ‘memoryless through bars of sunlight and shade in the morning of the world.’ (Eiseley, cited in Oelschlaeger 1991, 333)

Siddhatta formed a desire to liberate himself from the transient life of the passions, attachments and delusions. He became convinced that it was possible in the midst of this predicament we call life to experience a cessation of the sources of delusion and unhappiness, and pursue that which is free from ageing, death, sorrow, corruption and conditioning. And part of his solution was to retrace our steps to the still point of the ‘beginner’s mind’ (Suzuki, 2001) that, in some respects, draws on the pre-conceptual experience (the ‘first mind’) of immediacy with wilderness (before ‘the Fall’ into consciousness of time).

We have entered the axial age of the Anthropocene – a new turning point in the history of humanity, in the ongoing story of creation and, in all probability, a turning point in human consciousness. Today we are confronted by the unprecedented extent to which our human technologies, institutions and collective imaginaries have emerged during the course of the past 500 years as the most decisive influences on the fate of our planetary home and the atmosphere. Our ecological crisis is above all a provocation to return to our own fractured narrative of human-nature.

Siddhatta’s story is received today as a universal parable of a young man driven by a deep insight into the transient nature of life and its comforts, and a determination to embody a liberating path beyond the suffering associated with our human predicaments. It is an ancient story that pre-figures an emerging collective narrative or imaginary around wellbeing and social change in our own time – one that points to a contemporary sense of our psychic exhaustion and disillusion with the surface features of modern lifestyles and institutions that are increasingly mediated by a political economy of hubris, celebrity, and habit formation – an economy of spectacle that underpins today’s global circuits of production and consumption.

Little is known about the precise circumstances of Siddhatta’s decision to abandon his home life and his family. What we can surmise is that at the point of his departure his existential dilemma – his conviction that an attachment to things and people bound him to an existence that seemed mired in pain and sorrow – was not dissimilar to the experience of many of his contemporaries who opted for the life of a forest monk. What is distinctive and resonant in the Buddha’s life is his eventual response to the questions posed by the transience of life and its passing comforts: an ultimate rejection of the extremes of asceticism in favour of a ‘Middle Way’ dedicated to finally making peace – even falling into joy – with this fragile, all too brief sojourn on earth.